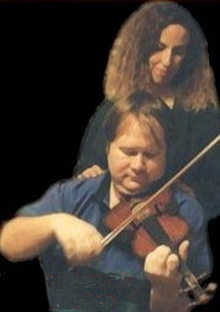 The first band I played in during the mid 70's was anchored by 15 year old Randy Howard and his dad, Floyd. We all knew he was destined for a great career. Just how great surprised even his biggest fans for Randy became a  twelve time National Fiddle Champion who recorded with Garth Brooks, George Jones, J.D. Crowe, Bela Fleck and a host of others.  Randy also played on several Grammy nominated albums.  Janice and I are fully aware of how privileged we were to have had the opportunity to play  and record with Randy over the years.  This site features the first complete recordings that we have done since Randy's passing in 1999. We will always remember that without his encouragement and support we would never have become song writer/arrangers and that our recent albums would not have been possible.
RIP,  good  friend.
Bud


"Randy is one of the few musicians I have paid to hear.  He's one of the best fiddlers I've heard."
Chet Atkins


"Plays with verve and impeccable technique."
The Chicago Tribune


"One fine fiddler, he has the technical ability of O'connor or Duncan, but there is a keen edge to his playing that is different and exciting."
SEBA Breakdown


"Howard has the chops of a conservatory trained musician without the malady of rhythmic stiffness."
Strings Magazine